Saint Nicholas: The True Hero of the Santa Claus Tale

Saint Nicholas, or Santa Claus as we know it, is considered a fairy tale hero today. Moreover, many figures come to mind when Santa Claus is mentioned. With his reindeer sleigh, gift bundle, toy-making elves, his house in the North Pole, and his red overalls, his cheerful laughter has become almost an icon.

The story of this fairy tale hero, who takes the color of his overalls from Coca Cola, is based on a reality. So who is Santa Claus?

He was born in Patara, Lycia, in 270 AD. Patara is located in the Kas district of Antalya today.

He was born as the son of a wealthy wheat merchant. For him, it was considered to be “a gift from heaven”, “the fruit of prayer and sacrifices”, and “savior and protector of the poor”.

He was believed to be a person who works miracles. According to a rumor; With the demolition of an incomplete church, it remains under the rubble. He emerged from among the stones of the destroyed church while his mother was crying.
Upon his father’s death, he became a fortune-teller. Nicholaos (Nicholas) also decided to use this wealth for the poor.

According to another rumor; A father who used to be very rich in Patara becomes poor. She can’t even afford her daughters’ dowry. When there is no hope, she even considers selling her daughters. Nicholaos finds out and wants to help the family. In order not to reveal his identity and not to hurt their pride, he goes to the girls’ house at night. While the girls are sleeping, he throws a bag of gold from the window of the older girl, equal to the amount of the dowry. The big girl, who found the pouch at dawn, was very happy.

next time; Nicholaos wants to meet the dowry of the middle and little girl. He sees that the windows are closed. That’s why he throws the sac from the chimney.

This is how the tale of Santa Claus leaving presents at night comes about. The depiction of Nicholas with three golden balls in icons and paintings is due to this story. 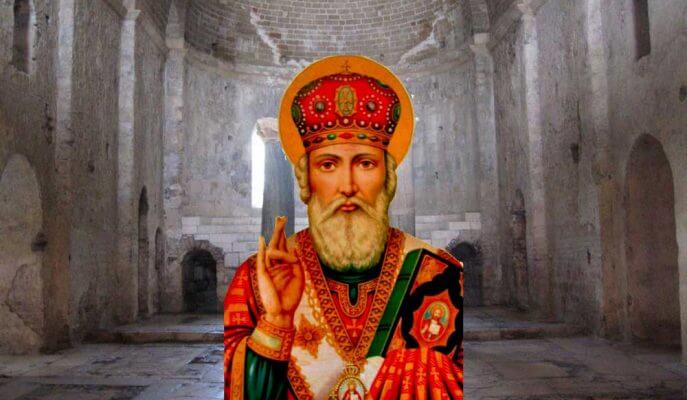 There is another narrative about him being the patron saint of sailors. Nicholas went to Jerusalem to become a pilgrim. On the return journey, the ship is caught in a storm. Nicholaos saves the ship from sinking with his prayers. It is said to bring back to life a sailor who drowned in the sea.

St. Nicholas immigrated to Myra after a while. The Archbishop of Myra has passed away. There is uncertainty about the person who will replace him. Thus, it is agreed that the first person to enter the church in the morning should be the archbishop. Saint Nicholas is chosen as the archbishop as the first person to go to church. Here he continues his miracles by saving three generals from death.

That year, famine broke out in Myra. The fleet that will carry corn from Alexandria to Eastern Rome is in Andriake, the port of Myra. Nicholaos arrives at the port immediately. He requests some corn from each ship. When the sailors arrived in Eastern Rome, they were surprised to find that the corn they had given reluctantly was in their place.

The anti-Christian Emperor Diocletian and Nicholaos during the period of Licinius were imprisoned like other Christians. WORK. In 325, he participated as archbishop in the assembly meeting in Nicaea to solve the problems within Christianity. A priest named Bonaventure tells of resurrecting three pickled children who were killed in an inn during the journey.

Saint Nicholas is thought to have died in 343 at the age of 65. The Myranians build a church for him. And in the sarcophagus they made for him, they sent him off to eternal sleep.

When the date shows April 20, 1087, it is rumored that they stole the bones of the merchants from Bari (during the Crusades). Later, the bones were taken to Bari and buried in the basilica. Some bones thought to belong to Nicholas are kept in Antalya Museum today.

The church, which was built at the death of St. Nicholas, was destroyed in an earthquake in 529. Instead, a church is built in the larger basilica style. The new church is also 8. It was destroyed in the 19th century by earthquakes and Arab raids. However, it has been renewed.

The church was battered in 1034 by the raids of the Arab navy. It was in ruins for ten years. Eastern Roman Emperor in 1042. It is told in his inscription that he had it repaired by Constantine Monomachus and his wife Zöe. 11. In the 19th century, some additions were made to the building and it was repaired.

In the 13th century, Myra fell into the hands of the Turks. It is known that the church was used for worship and some repairs were made in the church.

In 1738, the chapel next to the great church was repaired. C. Texier, who traveled through Anatolia between 1833 and 1837, stops by Myra. He also mentions the church in his books.

In March 1842, Lieutenant Spratt and Prof. Forbes comes to Myra. They make a sketch of the church. Thus, they see that there is also a monastery next to the church.

During the Crimean War in 1853, the Russians took care of the maintenance of the church. In order to establish a Russian colony in this region, they buy land for the Russian countess named Anna Golicia. But the Ottoman Empire realizes the political side of the situation. The lands taken by the Russians are taken back. However, only church repair requests are accepted.

In 1862, a French named August Salzmann was assigned to repair the Nicholaos Church. These restorations damaged the original of the church. until. During this restoration, the bell tower seen today was added.

There are nearly two thousand churches built for Santa Claus, the patron saint of more than one city. The life stories and miracles of Santa Claus are featured in many books. But for the oldest one, it is said to have been written by the Abbot Michael of the Stadion Monastery in Eastern Rome in 750-800 years.