One of Netflix’s most popular productions of recent times, The Queen’s Gambit tells the story of Beth Harmon, a chess prodigy who grew up in an orphanage in Kentucky in the 1950s.
There are some very clever details and some interesting information about the series. Let’s see together.
Attention! This content contains spoilers.

1) Anya Taylor-Joy knew nothing about chess before her role as Beth in this project. And he explained that his learning contributed a lot to his entering this world.

In a short time, he started to read and research about chess.

2) All the moves in the chess scenes were prepared in advance by chess consultants Garry Kasparov and Bruce Pandolfini. This duo also helped all the actors.

Netflix has stated that one of its main goals is to “make sure that if a chess expert finds an error while watching the show, any move is not removed from the story for being wrong.” To ensure the authenticity of the game, the series was assisted by longtime chess coach and expert Bruce Pandolfini and Russian chess grandmaster Garry Kasparov.

3) Actually, the creator of the series, Scott Frank, wanted Garry Kasparov to play the role of Borgov, but Kasparov refused this offer and only acted as a consultant.

4) All the chess scenes seen on the screens were actually played by the actors, including the quick chess match scenes.

Anya said these quick matches were her favorite parts of the show.

5) Beth’s all-white outfit in the last episode is a reference to the queen’s piece in chess.

As her final outfit in the finale, Beth is wearing an all-white and glamorous outfit with her hat. This outfit transforms Beth into a visual representation of the white queen chess piece. The costume designer of the series, Gabriele Binder, in an interview with Vogue; “The idea is to express that she is now the queen on the chessboard and the chessboard is the world,” he explained.

6) Alma’s death may have been predicted by this scene.

One of the most fascinating details that most viewers probably overlooked was a detail noted by a user on Reddit. In this scene, Alma is seen looking into the hotel mirror – the scene of the shoot, 19th Century. It resembles a famous drawing by the 19th century painter Charles Allan Gilbert called “All Is Vanity”. The painting shows both a woman looking in the mirror and a human skull. This scene was the last time Alma was seen live on the show.

7) The total of 7 sections in the series represents the number of squares a pawn must pass to become a queen.

There is an interesting detail about the structure of the series. As you know, “The Queen’s Gambit” mini-series consists of seven episodes. The array structure may reflect the seven squares a pawn must pass through to become a queen…

8) A few years after saying “I don’t get caught dead at Snyder,” Beth meets Margaret at Ben Snyder’s store.

Margaret is a girl from Beth’s high school who bullies Beth because of her brown shoes. In one scene, Beth catches Margaret making love with her boyfriend in the school library. In that scene, Margaret says: “I don’t get caught dead in Snyder.” A few years later, in episode five, Beth encounters Margaret while shopping at Ben Snyder’s store. What can we say, a really satisfying cycle.

9) The headline of one of the newspaper clippings that Mr. Schaibel was hiding reads, “Beth Harmon Proves That Not All Women Are Stupid.”

In Mr. Schaibel’s basement office, among all the newspaper clippings praising and acknowledging Beth’s success, is a headline that reads, “Beth Harmon proves that not all women are stupid.” This detail is another clue to the misogyny Beth has to confront.

10) Cleo could be a Russian mole sent to sabotage Beth.

Cleo is a mysterious French model who meets Beth at Benny’s apartment. The night before Beth’s game against Borgov, he invites Beth to an alcoholic party. Many viewers find Cleo’s accidental appearance suspicious the night before Beth’s most important match with Borgov. There’s even a theory on Reddit that Cleo was working for Russian teams to sabotage Beth.

11) He always uses Mr. Shaibel’s old board in the scenes where Beth is playing chess on the ceiling.

There are many scenes throughout the series where Beth visualizes a game of chess on the ceiling. If you look closely enough, you might notice that the chess set used in all of the headlining games are the pieces Beth used when she was learning to play chess with Mr. Shaibel…

12) The scene in Beth’s math class gives a little clue about what her mother does.

In the first episode, Beth is seen picking up a book titled “One Term Representations and Symmetrical Presentations” written by her mother, Alice Harmon. This scene shows the audience that Beth’s mother is a gifted mathematician.

13) The checkered clothes that Beth wears throughout the series are used to evoke the chessboard.

“I always try to show what’s going on inside a character by what they’re wearing outside, and I thought the plaid would be interesting for Anya’s character,” series costume designer Gabriele Binder told Vogue. said.

14) Beth inherits one of her first chess trophies and shoes worn by the popular girls in her high school.

On her first day of high school, Beth is bullied by popular girls for her brown shoes. In the same scene in the second episode, the camera goes down to show all these girls wearing black and white Oxford-style shoes. Later in the episode, Beth wins her first cash prize in a chess tournament and goes shopping – with this prize she buys her first chess set and dress. But what you might not have noticed is that she bought herself a pair of shoes that all the popular girls wear.

15) Beth is wearing a dress very similar to the one she wore in the first episode, with her name on it, in her last game.

16) Towards the end of the series, Beth’s lipstick shade is similar to what Alma used to wear.

Apparently, there’s a hidden message behind the lipstick color Beth uses towards the end of the series. “Alma’s dark lipstick is one of her key features. As the series progressed, makeup designer Daniel Parker planned that Beth’s own lipstick shades would become more and more similar to hers as a tribute to her second mother,” Netflix explained in a video.

17) In the final episode, it is seen that Beth is still using the first chess set she bought.

After Beth wins her first cash prize at a chess tournament, she goes shopping and buys her first chess set. In the seventh episode, when Beth goes to her hotel room to figure out how to beat Luchenko, she is seen still using the same chess set.

18) In Beth vs Borgov’s match at the end of the series, the cycle is complete when Beth plays white.

In Beth’s first game of chess against the orphanage keeper, Mr. Shaibel, she plays white, which gives her the advantage. When Beth plays white pieces in her last game against Borgov, it all goes into a cycle.

19) The character of Benny in the series was inspired by the real-life American master chess player Bobby Fischer. Bobby Fischer is known for his ‘Game of the Century’ win at the age of 13. 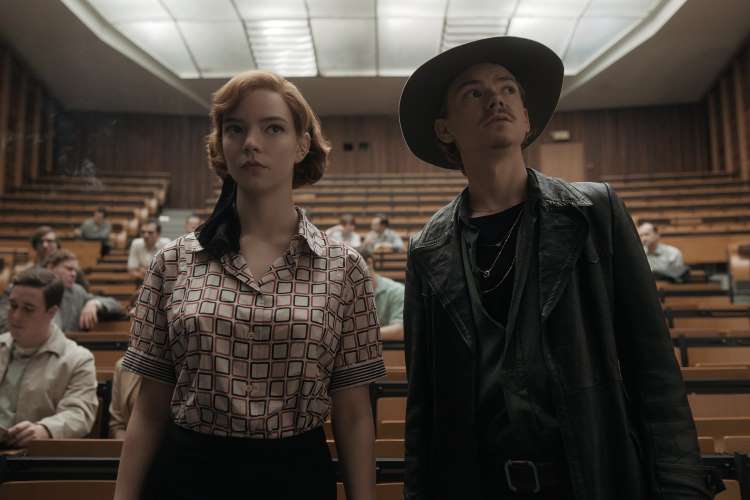 20) Although the majority of ‘The Queen’s Gambit’ took place in the United States, it was shot in Berlin. 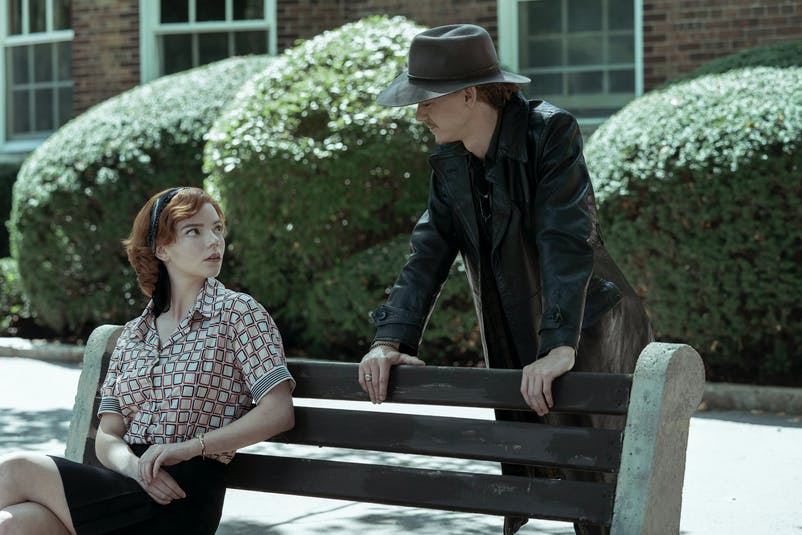 21) Marielle Heller, who plays the character of Alma in the series, ‘A Beautiful Day in the Neighborhood’, ‘Can You Ever Forgive Me?’ and ‘What the Constitution Means to Me’.

“It was quite exciting to return to acting after years of directing and I don’t know what my next big project will be,” Marielle explained.

22) Since the chess moves that Beth made up in her mind on the screen are real moves, the team that made the special effects later learned how to play chess.

23) Anya is a huge Harry Potter fan and she was very happy to see Harry Beltik in ‘The Queen’s Gambit’ and Harry Melling, who played Dudley in ‘Harry Potter’ movies…

Anya moved to London from Buenos Aries when she was 6 years old and learned English from the Harry Potter books.

24) Beth’s lipstick colors in each scene were chosen separately and the colors represent Beth’s age.

“Lips and eyelashes are one of the most important things that represent what a character does or behaves. Towards the end, Beth’s lipstick color can be considered a tribute to her deceased mother,” says makeup and hair designer Daniel Parker. he made a statement.

25) Unbeknownst to each other, Anya, screenwriter Scott Frank, and hairstylist Daniel Parker decided that Beth should have red hair. Wigs were used to make Beth’s hairstyles.

Daniel Parker, “Sometimes we change 3 different hairs a day. It’s impossible to do them without a wig.” he made a statement.

26) And finally, Anya always cried while filming the final scenes where Beth was playing chess in the Russian park because she was so happy for Beth at that moment.