Darts game is one of the most preferred games from past to present. The main reason for this is that darts can be played easily and by everyone. Almost everyone has been in an environment where darts is played at some point in their life. This environment is sometimes a place to have fun outside with friends, and sometimes it is our home itself.

Darts is a very popular entertainment tool thanks to its easy to find and playable equipment. Let’s add, of course, without forgetting that there is competition, as in every sport.

When we investigate the origin of this fun game, we come across surprising things. For the first time, the game dates back to a very old time period such as the Middle Ages. In this period, it started to become widespread, especially with the use of archer team soldiers for their training. In the following years and ages, it becomes a game that descends among the people. Today, as we mentioned, we come across it among the most preferred entertainment and competition tools. Without further ado, let’s move on to reviewing all you need to know about the darts game.

What is darts and how to play it? 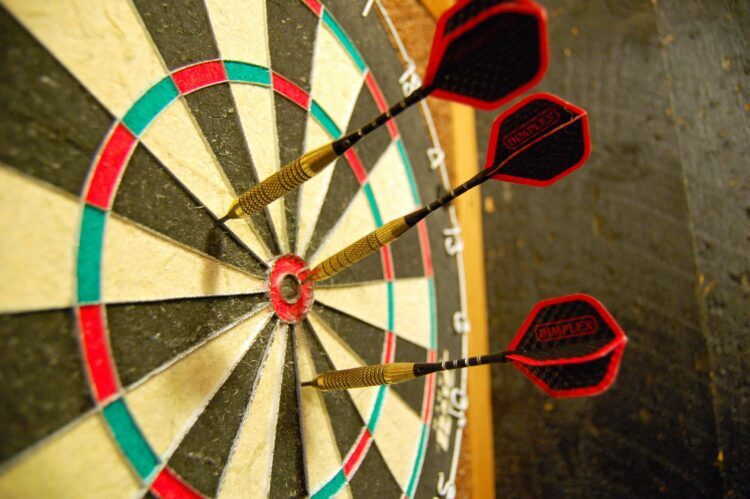 The game of darts is played by shooting arrows on a floor that is divided into pieces of certain colors. Of course, provided that this game has different types and rules. First of all, let’s say that the most important couple of darts are the dartboard and arrows. Darts game is performed through these equipments. The most important condition in the game is to get the necessary points. Players can play darts either as a team or individually.

Each target reached by the arrows during the game has a certain point value. Necessary calculations are made on this point value and a winner is revealed at the end of the game. Of course, provided that you hit the right areas inside the target board.

Dart, which first appeared in England, is a game played all over the world today. There are also many types of the game where it is very essential to score. These types are used to determine the duration of the game, the calculation style and the number of people. Although it has been brought into the language as Turkish “oklama”, the name dart is still used.

What Should Be Considered During the Darts Game? 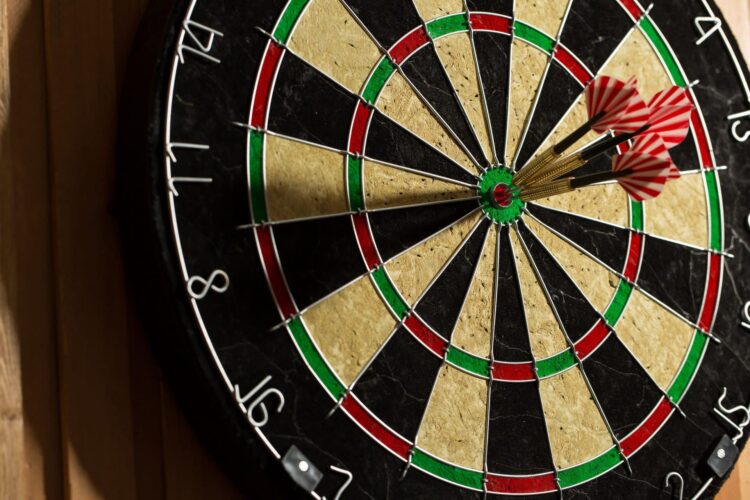 As in every sport, the dart game has its own characteristics. Thanks to these features, it is possible to have information about the function and type of the game. These rules, which must be observed while playing darts, are mostly related to the scoring process. Scoring is sometimes determined by the number 0 in reverse, and sometimes it is determined from zero to the highest.

Perhaps the first and most important information during the dart game is that the arrows hit the target area on the board accurately. Of course, this does not mean hitting any part of the dartboard.

The target board consists of four basic areas: double ring, triple ring, outer bullseye and inner bullseye. Arrows hitting these areas are evaluated over different points. Shots made outside of this area are considered invalid. In this sense, it should be noted that not every shot that reaches the board has a point value. Three accurate shots made into the divided areas are among the most crucial points of the game.

Vital Tips to Win the Game 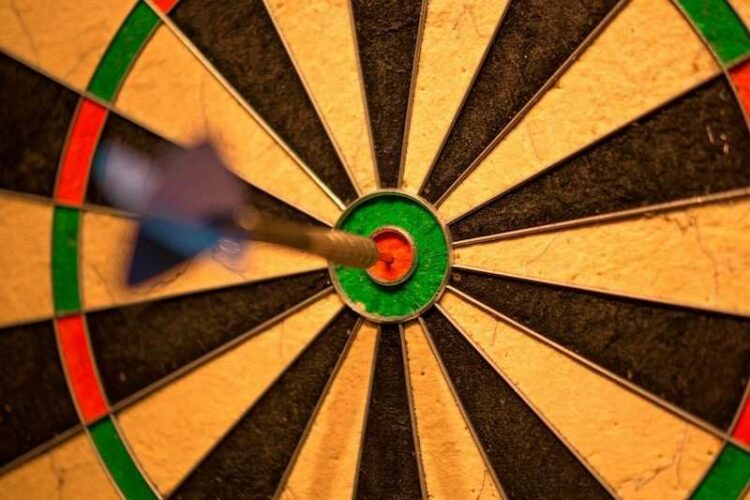 If you want to get the maximum enjoyment and the feeling of winning from the darts game, you need a few details. Perhaps the most important of these is the target slices on the board. If you dominate the target slices, you also decide how long the game will last. Each target segment and the shots fired at these segments have different meanings.

The main aim of the game is to determine the areas by making three accurate shots on the slices on the target board. In this way, points are earned and the target area is closed. Let’s not pass without adding the most miraculous situations that you can encounter while playing the game of darts.

We can say that house shooting is one of these situations. It’s called a house shot, meaning that the player turns a single target into his area. Three hits on one and the same target means house. Of course, you should make this shot in the part of the target slices on the board. The player or team that closes all the areas on the board is considered the winner of the game. In this sense, it is not surprising that it is a very strategic game.

How is the Scoring and Measurement System Determined? 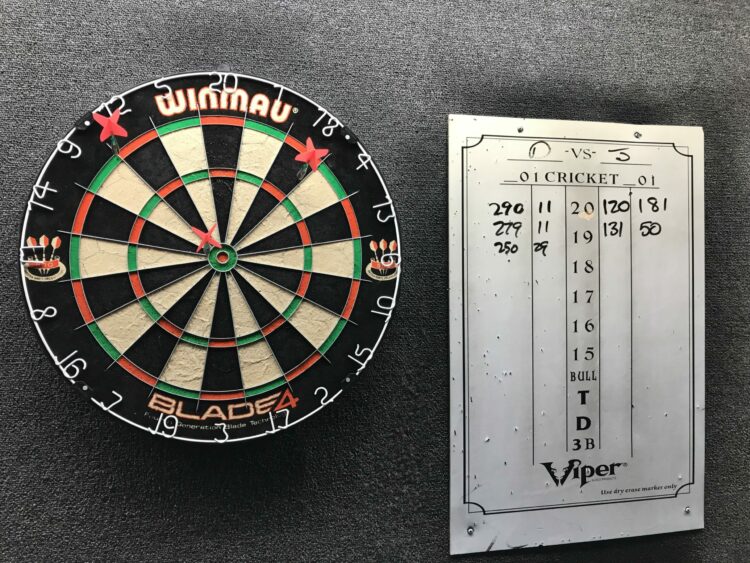 Let’s start with the basic duo of darts, the arrow and the target board. Feather is placed behind the arrows to ensure that the arrows are directed towards the target in the clearest way. With the help of these feathers, the arrow glides through the air and gains momentum to pierce the target board. The arrows, which are 16 cm long, can have various colors and patterns. The target or aiming board has a diameter of 45 cm and is divided into numbers from 1 to 20. These numbers also serve to identify slices on the target.

The red area at the origin of the target board is called “bullseye”. Accurate shots made in this area are worth 50 points. The green area just outside this area is defined as the “outer bullseye” and is worth 25 points. There are 2 different circles on the target board, which resembles baklava slices. These rings determine the status of the shots made. Shots hitting the numbers in the outermost ring are calculated in doubles. Shots hitting the ring that is closer and narrower to the center are calculated in terms of three times as much. 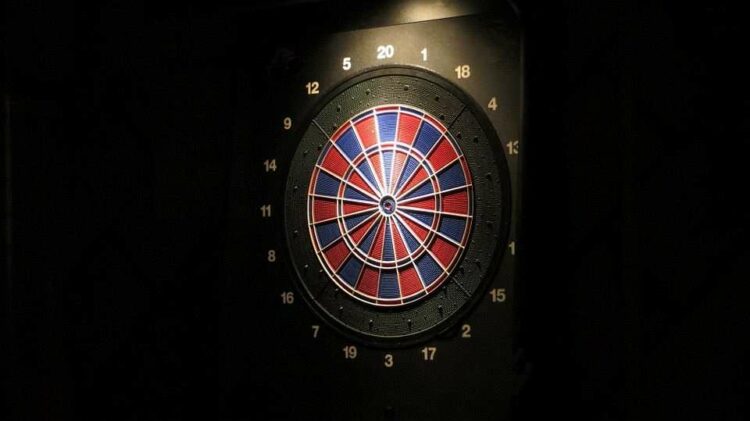 There are many different types of darts played today. These types differ from the way the game is scored to the way it is played. The most known and played dart types are 301, 501, 701, Cricket, High Score, Shanghai, Split Score and Rapid Score. Many of these playing styles also appear in international tournaments. So what is the difference between these dart styles? Games with the names 301, 501 and 701 are generally played by deducting the shooting scores from these numbers. Whichever player or team reaches zero first means the game is won.

In cricket, on the other hand, players try to target areas of numbers 15-20, including bullseye. Whoever closes these areas first, wins the game. High Score, on the other hand, is based on getting a high score, as the name suggests. It is the type of dart in which the electronic target board is used. The person with the highest score wins the game. In Split and Rapid Score styles, the aim is to hit the areas determined by the machine. The player who hits the numbers the fastest and the most in these areas is deemed the winner.