The Largest Structure in the Universe 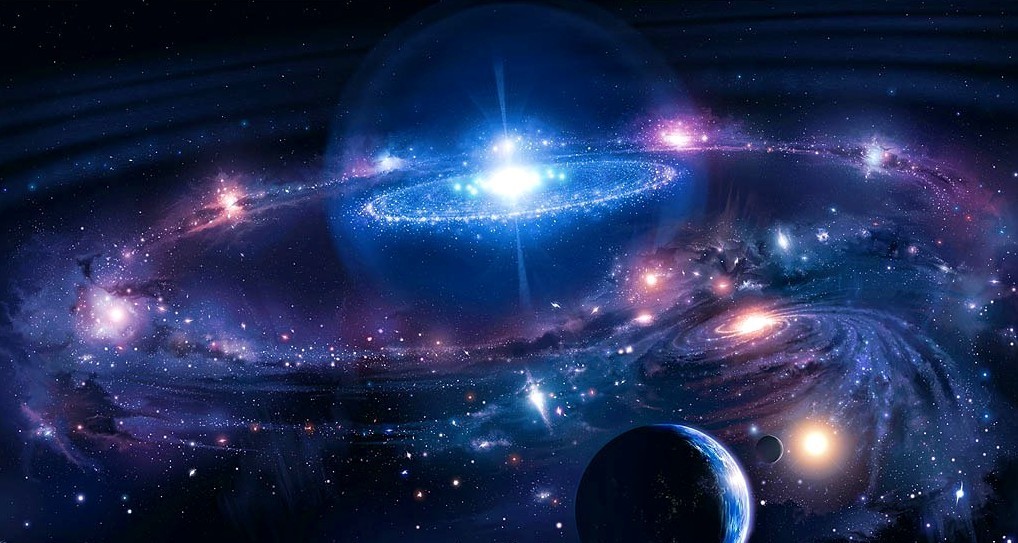 Our days and years pass for daily hustle and bustle. We say “We have as much work as the Earth”, we think that the Earth is something big. In fact, our Earth is just one of eight planets orbiting the Sun, which is an ordinary star in the Milky Way Galaxy, which contains 400 billion stars. There are structures in the universe so large that even the Milky Way Galaxy becomes an ordinary star cluster next to it. So, what are the largest structures in the universe? The largest structures in the universe are known as “superclusters” and “filaments”, the structures formed by the merging of many galaxies. They range in size from 100 million light-years to several billion light-years. By comparison, the diameter of the Milky Way Galaxy is 100,000 light-years, and 1 light-year is 9.5 trillion kilometers. Although galaxies are gigantic structures, matter, dark matter and perhaps another force that we do not know yet interact with other galaxies and attract each other in some way, forming long, linear structures that look like filaments when viewed from a distance. We use the word “filamentous” here, but I don’t think there is a word in Turkish or any other language to describe how big these gigantic structures are, because it’s way beyond our imagination! When viewed from further away, these filamentous structures look like a spider web, a so-called “cosmic web”. The seemingly empty spaces between filaments in the web are also called “voids”. Whether the structures we think of as spaces are really empty or whether there is something different in them is another matter. Although we might call the entire cosmic web the largest structure in the universe, since the filamentous structures in the web often appear to be somehow connected, this definition is debatable. Instead, it currently seems more accurate to identify the largest filamentous structures in the network and find the largest of them. The way to discover such filamentous structures is to combine years of observational data with survey telescopes, gradually observing all of space in all directions. When comparing two data obtained from the same telescope, effects such as margin of error and calibration are lower than data obtained from two different sized telescopes of the same region. Therefore, combining data from the same telescope provides a more secure data set.

As a result of observational studies conducted with the Sloan Digital Sky Survey (SDSS), which has been scanning our universe in the optical and near-infrared region for many years, it was discovered in 2003 that the largest structure in our universe is the Sloan Great Wall. Of course, this should not be thought of as a closed wall. It is 1.37 billion light-years in length and is about 1 billion light-years from the Solar System. These numbers may not make sense at once, but if we consider that the light of a star formed at one end travels to the other end in 1.37 billion years and the Sun is 4.6 billion years old for comparison, we understand what size we are talking about. Of course, as a result of scanning observations made with different telescopes over time, a few more structures larger than the Sloan Great Wall were discovered. One of them, the BOSS Great Wall, was discovered in 2016 by the Baryon Oscillation Spectroscopic Survey project. The sum of the masses of the 830 galaxies it contains was found to be 10 thousand times that of the Milky Way Galaxy. Although the length of the wall, which is 4.5 to 6.5 billion light years away from us, is determined as 1 billion light years, it is estimated to be larger than the Sloan Great Wall in terms of volume.

Voids of the Universe
Beyond these two great walls is the Great Wall of Hercules-Corona Borealis, like the Great Wall of Sloan, whose filamentous structure could not be photographed but is currently estimated to be the largest. This wall was detected in 2013 by a Hungarian group tracking gamma-ray bursts, its size is estimated at 10 billion light-years. Frankly, there is no consensus yet on this study, which suggests that gamma-ray bursts concentrated in a certain region may have come from within a certain large structure. So as new observational evidence comes in, perhaps the largest will rise to the top of the list.
On the other hand, we also said that there are gaps; worthy of discussion, but according to some, it can be said that the gigantic gaps between the filamentous structures, beyond the filamentous structures, may be the largest structures in the universe. greater than 100 million light-years
maybe a few galaxies or nothing in these gaps. The ones that are billions of light-years in size are called “supervoids”. The interesting thing is, we probably live in such a super-void. The width of the KBC Void (KBC Void), which contains the Milky Way Galaxy and the Local Group with dozens of galaxies close to us, is estimated to be 2 billion light years. The cavity is named after astrophysicists Ryan Keenan, Amy Barger, and Lennox Cowic, who made the discovery in 2013.
Although we are excited to find these sizes, to find the “width” of everything, understanding such filamentous structures, superclusters, or the cosmic web helps us better understand the Big Bang, as it tells us the shape and structure of our universe on a large scale. . The multiplicity of scanning projects and our excitement in researching the greatest will perhaps lead us to discover many more great walls and structures over time.