Megalodon: The Largest Shark to Have Ever Lived on Earth

The largest shark in the world is undoubtedly the white shark. But Megalodon, the ancestor of this species, still manages to impress scientists as the largest shark that ever lived.
It is considered one of the largest and most powerful predators that has ever lived. Its existence is known only because of some remains. Discussions continue about its image and its maximum height.

It is likened to a whale shark or a great shark. While the shape of the tail fin resembles a crescent; The caudal spine was located on both sides of the caudal peduncle. The stern and second dorsal fins were small.

This fin pattern is also found in whales, tuna, and other sharks. It plays a role in reducing friction while swimming.

Due to the sand tiger shark-like teeth, its structure is probably closer to this species.
Since no fossil remains have been found in its entirety, their size is an estimate. However, dental and vertebral fossils are important in terms of giving an idea of their true size.

By comparing the teeth and vertebrae of Megalodon with those of the great white, an average length estimation method was produced.

It is possible that different megalodon populations around the world have different body sizes as a result of different ecological factors.

The megalodon is estimated to be the largest macro-predatory shark to have ever lived.

A 2015 study linking shark size and swimming speed estimated that the megalodon would swim at 18 kilometers per hour. His body mass was 48 tons. These figures are quite consistent with other sea creatures of its own size, such as the fin whale, which accelerates to 14.5-21.5 km/h.

Its large size is thought to be due to climatic conditions and large prey. It is also predicted that his metabolic rate and swimming rate will be affected by the evolution of regional endorthermia.

The most common fossil of megalodon consists of teeth. It can be identified by its triangular shape, robust structure, large size, fine serrations, absence of lateral teeth, and a prominent V-shaped neck (where the root meets the crown).
The tooth meets the jaw at a right angle, similar to a great white shark. The part of the tooth near the tongue is convex. The part near the lips is flat.

The front teeth are almost perpendicular and symmetrical to the jaw. Whereas, the posterior teeth are oblique and asymmetrical. Megalodon teeth are larger than those of known shark species. Its diagonal length is measured as 180 millimeters.

What Anatomical Structure Did Megalodon Have? 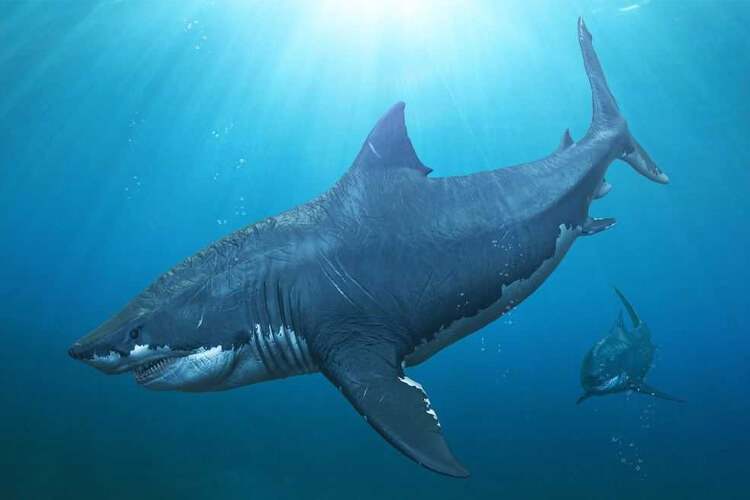 Megolodon was identified by means of the dental fossil, central spine fossils and coprolites (fecal fossil). Like all sharks, its spine was made of cartilage. For this reason, it has not come to the present day in a perfect way.
Its chin is larger, stronger and thicker when compared to the great white. His chondrocranium, a cartilaginous skull, was more blocky and more solid in appearance than that of the great white. Its fins were in proportion to its large size.

Of all the vertebrae found, the most notable is a nearly preserved vertebral column, the only specimen excavated in Belgium’s Antwerp Basin in 1926.

The coprolite remains of the megalodon are spiral-shaped. This indicates that the shark may have a spiral valve, a corkscrew-shaped portion of the lower intestine. In this respect, it is similar to the existing straight-nosed sharks.

Remains of Miocene coprolite, measuring 14 cm, were discovered in Beaufort County, South Carolina (Miocene: a geological period between 23.03 and 5.3 million years ago in geological time).

Megalodon had a cosmopolitan distribution. Its fossils have been unearthed from many parts of the world, including Europe, Africa, America and Australia. It is mostly found in subtropical and temperate latitudes.
It is estimated that they have mesothermic (warm-blooded) structures. Therefore, it is thought to have the capacity to withstand the temperatures in these places.

Based on the finds, the megalodon is thought to have lived in a wide variety of marine environments. It is thought to include the habitats of shallow coastal waters, elevated coastal areas, swampy coastal lagoons, sandy shores and open deep seas.

It is estimated that adult megalodons are not common in shallow areas of the water. Thus, it is known that they mostly prefer offshore areas. In particular, it is hypothesized that it may have moved between coastal and ocean waters at different stages of its life cycle.

The sizes of fossil remains average 11.6 meters in the Southern Hemisphere. In the Northern Hemisphere, it is 9.6 meters. Also, finds from the Pacific indicate that it was wider than the Atlantic.

Megalodon had a global distribution. Fossils of fish have been seen in many parts of the world.

Megalodon and its Hunting Habits

Sharks are generally opportunistic hunters. But the megalodon, with its large size, high-speed swimming ability, and powerful jaw, was an apex predator capable of consuming a wide range of animals. And it was probably one of the most powerful predators that ever existed.

Fossil evidence shows that it preyed on many marine mammals, including dolphins, small whales, shark-toothed dolphins, sperm whales, head whales. In addition, among their prey; There are also seals and sea turtles.

Whale bones have been found in some dental fossils. In some finds, chewed whale remains were uncovered.

How did the megalodon become extinct?

During the megalodon’s existence, the Earth went through a series of changes that affected marine life. As a result of a cooling current 35 million years ago, glaciers formed at the poles. Geological events altered currents and precipitation.

The cessation of the current called the Gulf Stream has caused many results. Nutrients were prevented from reaching major marine ecosystems. In this case, too, the nutrient-rich water negatively impacted their food supply.

During the Cenozoic era, the greatest fluctuation in sea level occurred due to the expansion of polar ice caps. This event resulted in the extinction of coastal environments and some marine species.

As a result of these oceanographic changes, sea level decreases occurred. The majority of shallow warm water seedlings suitable for Megalodon also disappeared. It is thought that this situation prevents their reproduction.

Increasingly colder water means that suitable habitat for megalodon, a warm-blooded creature, is decreasing.
During the Pliocene, water temperatures dropped significantly. In the process, it has been confirmed (thanks to fossils) that megalodon has not been found in all parts of the world.

However, the drop in temperature is not sufficient reason for the extinction of the megalodon. During the Pliocene, the distribution of megalodon decreased. But it was able to survive in colder latitudes. The finds were found in places where the average temperature was between 12 and 27 °C.

The cooling of the oceans during the Pliocene is thought to have restricted the megalodon’s access to the polar regions. It is therefore thought to have been deprived of large migrating whales.

It is thought that competition with other predators present in the Miocene and Pliocene may also have contributed to the decline and extinction of the megalodon.

The extinction of the megalodon set the stage for further changes in its marine habitat. The average body size of some whales increased significantly after their disappearance.

Increasing numbers of large whales may be instrumental in the extinction of the megalodon, which chose to go after smaller whales.

The extinction of the megalodon had a positive effect on other apex predators of the great white shark. Because they could spread to areas where megalodon were not found.

Megalodon in the Media

• In 2003, megalodon was depicted in the BBC’s TV documentary series Sea Monsters. It was described here as the “danger” of the age.
• History Channel’s show Jurassic Fight Club; A megalodon was described attacking a Brygmophyseter sperm whale in Japan.
• It has been the subject of movies such as Shark Attack 3: Megalodon and Mega Shark.
• Appeared in the 2017 video game Ark: Survival Evolved.
• Megalodon was featured in Discovery Channel’s Shark Week series.

Animals in Danger of Extinction